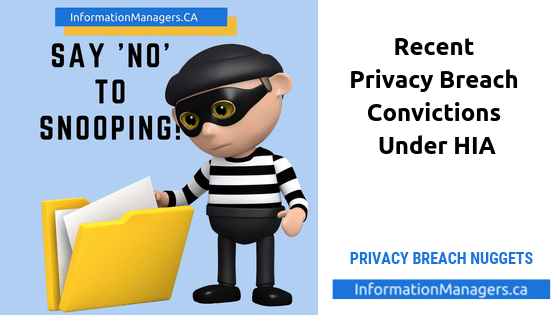 In August 2018, Alberta proclaimed amendments to the Health Information Act (HIA) that requires healthcare providers (custodians) to report a privacy breach with a risk of significant harm to the Office of the Information and Privacy Commissioner (OIPC), the Ministry of Health of Alberta, and of course, to patients affected by the privacy breach.

This requirement that custodians must report a privacy breach to the to the OIPC has resulted in a huge increase in the number of reported privacy breaches in healthcare.

This is not unexpected. We in healthcare know that there are many privacy breaches that happen everyday. Many of these breaches are honest mistakes. However, an increasing number are intentional, malicious actions intended to harm others.

The benefit of having these breaches reported to a regulator is to improve compliance to reasonable safeguards to protect the health information of Alberta residents. And, as a result, more custodians and affiliates (people that work for a custodian) are being held accountable under the HIA legislation to ensure that they are meeting the reasonable safeguards.

What Happens When A Privacy Breach Is Reported To The OIPC

If an investigation is indicated, the OIPC will conduct the investigation and report their findings to the Crown prosecutors at Alberta Justice. The Crown will determine if it will continue to press charges under the HIA.

Under the recent amendments to the HIA a custodian or an affiliate or both could if found guilty of an offence is liable for a fine anywhere between $2,000 to $500,000 depending on the circumstances and the nature of the offense. Other sanctions may also be applied by the court.

It takes time to report a privacy breach, have it reviewed and investigated by the OIPC and the Crown, and have individuals charged and appear in court.

We are now starting to see the first cases charged after the August 2018 amendments coming to court and privacy breach convictions under the HIA.

During a routine internal audit of health records in the Alberta Public Laboratories clinical lab at the Red Deer Regional Hospital identified unauthorized access by lab employees. These breaches were first identified by the hospital during a routine audit of their electronic record systems. The internal investigation between December 2018 and May 2019 identified 2,158 patient records were accessed. Alberta Health Services reported that 30 staff were involved in these breaches and three staff are no longer employed by the lab.

There have been three recent decisions in from the Alberta provincial courts as a result of mandatory privacy breach reporting legislation.

In June 2018, Alberta Health Services (AHS) received reports of suspicious activity by a billing clerk in Red Deer. An internal audit and investigation indicated that the clerk accessed the health records of 52 Albertans without authorization. AHS reported the breaches to the OIPC in June 2018.

The OIPC opened an offence investigation and referred its findings to the Specialized Prosecutions Branch of Alberta Justice. Charges were laid in July 2019. The former AHS billing clerk received a $5,000 fine on August 2019 and was ordered not to access health information for one year.

Snooping By A Clinic Employee

In another case, an Edmonton medical clinic employee was fined after pleading guilty to health data breach. The employee knowingly accessed health information of two people and made suspicious statements to the two individuals about their personal medical details. The individuals then requested access to the audit logs and the provincial electronic health record system, Alberta Netcare.

The individuals reported a complaint to the OIPC at which point the OIPC conducted an investigation.

On September 30, 2019 in Red Deer Provincial Court a billing clerk with Alberta Health Services was fined $8,000 for illegally accessing health records. The clerk opened health records of 81 people over 4,7471 occasions without authorization from his employer and custodian. The court also added the following conditions

We will continue to see investigations under the HIA at appearing in our courts. The OIPC is currently investigating over 20 incidents and has flagged 70 more as potential offences. 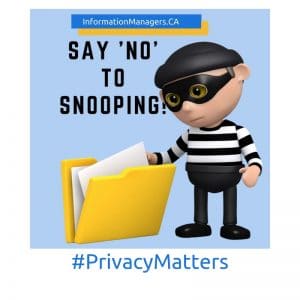 Each of these incidents involved employees making poor choices about accessing patient health information. Reasonable prevention steps include privacy awareness training for every employee, healthcare provider, and contractor. In addition, every healthcare practice should be, monitoring access to records with routine audits and applying sanctions.

We obviously don’t speak often enough about what is acceptable, appropriate, and authorized access to patient’s health information.

A privacy breach management plan will help you to prevent a breach and, when a breach happens, identify a privacy breach early to limit the risk of harm, size, and the cost of the breach.