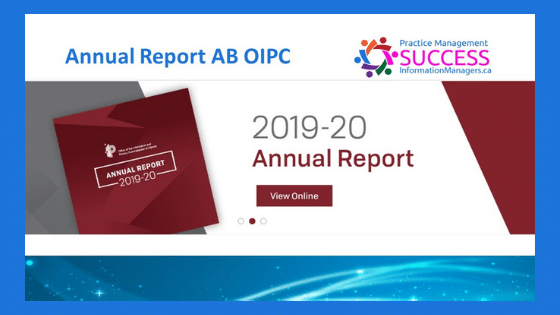 The report is from April 2019 to March 2020. This is the first full year of mandatory privacy breach reporting requirements in Alberta.

Because of the volume of the privacy breaches, the OIPC have now chosen to triage privacy breach reports. They are fast tracking any of those breaches where individuals have not yet been notified about that privacy breach or where there is a potential offense is suspected.

If you've submitted a privacy breach report to the commissioner's office and haven't heard from them yet, it may be because it's gone through this triage process and, if you have completed an internal investigation and notified affected individuals, your breach report has not been flagged as a high priority. 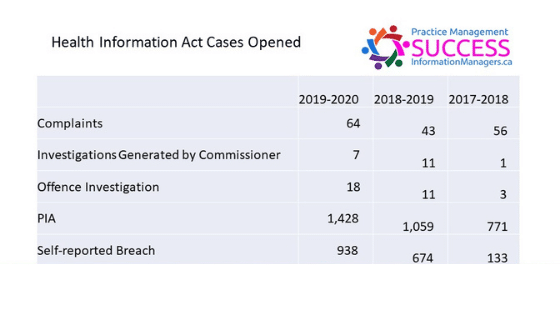 The OIPC conducted investigations regarding offences under the Health Information Act (HIA), usually privacy beaches. In that time period, they forwarded 18 cases to the Special Prosecutions Branch of Alberta Justice for further investigation.

Human error is still a large source of privacy breaches. This can include both misdirected communications, such as miss-sent snail mail, email, or faxes; and unauthorized disclosure, such as when health providers discuss health information with other providers not involved in the patient care.

There were also 20 incidences of theft that they noted in this report and it included rogue employees.

Snooping continues to be an issue, although the report did not provide numbers to go with that.

Ransomware is also a serious issue, one that the commissioner office predicts to continue, particularly in clinics who have a lack of technical security controls on their computer systems.

Social engineering, which is tricking someone into divulging information based on false pretenses and assumptions, is a significant danger in the healthcare industry.

This is a good word of caution for all of us is to not make assumptions just because somebody's email signature line says a pharmacist or other healthcare provider. We still need to make sure that we have verified the identity of that individual and not rely on that email signature alone.

You can download the report from the OIPC website. It provides a variety of other statistics and examples about investigations reports and privacy breach trends that may be of interest to you.

Keeping Privacy Active in the Minds of Clinic Staff

What Healthcare Providers Need to Know About Computer Security and Standards